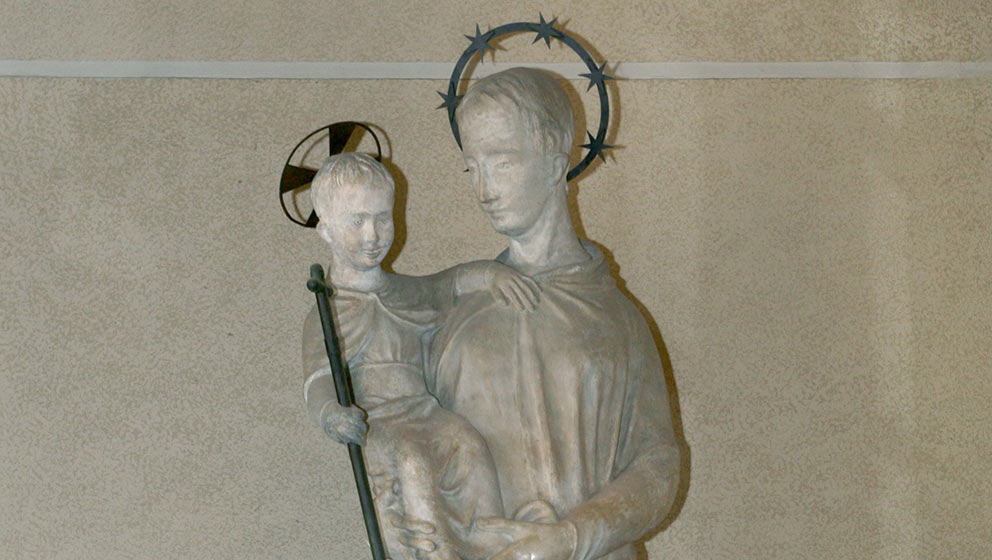 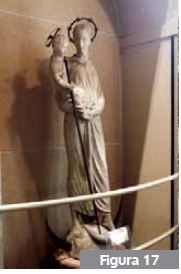 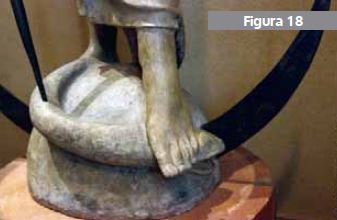 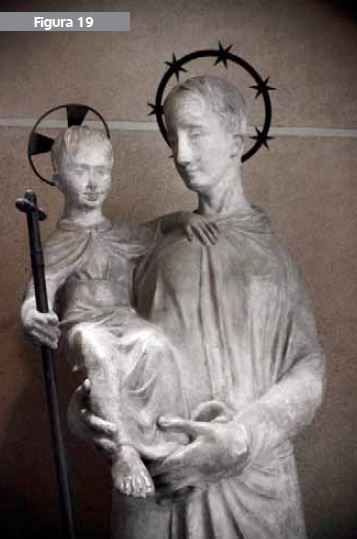 Statue of the Immaculate Conception

...The way he gives to a plastic image the appearance of a humble and everyday tale particularly persuasive.
In these images, he refuses any tone which would take them away from their human limits...
M. De Micheli, Giacomo Manzù, Images for a new humanity

The statue by Giacomo Manzù portraying the Immaculate Conception (fig.17) is free-standing and it was made by the Bergamo’s sculptor in 1932. In his interventions at the University, architect Giovanni Muzio relied on the cooperation with other artists and his work with Manzù was particularly prolific, considering the scope of the interventions that the sculptor was commissioned by the University. Initially conceived for the Cappella Maggiore (Main Chapel), the statue was moved to Via Necchi, at the entrance of the Augustinianum and the Ludovicianum Colleges following Father Gemelli’s wish. Since 1976, for conservation issues, it was moved to the Negri da Oleggio Room, up to its present repositioning in 2004 in the Entrance Hall preceding the Aula Magna.

Manzù himself would remember this first important public commission: “After coming back to Milan in 1932, I began the works for the Università Cattolica, commissioned by Father Gemelli. I made four stucco and four granite bas-reliefs for the Chapel and a statue of the Immaculate for the entrance to the new Student Residence” (G. Manzù, Il Frontespizio).

The events concerning the positioning of this statue are rather controversial. It must have been moved very soon because in that very same year it is not listed any more among the artworks located in the University. In one of his letters, Father Gemelli asked Barelli to find a new location for the statue, whose positioning inside the Chapel, even if it previously approved, he now felt no longer appropriate.

In fact, the friar would ask sculptor Castiglioni to make another statue: “It must be a statue appropriate for a church, so it needs meditation and composure […] the whole statue must inspire worship and to do this there should be more communion between the statue and the people kneeling in front of it. […] I would make it more absorbed, more tense, more encouraging meditation” (ASUC, fondo Corrispondenza).

The Virgin holds the Child and her physical features are represented in an unusual way. With very short hair and without any veil on her head, she has more of a masculine appearance. Dressed in a simple and long robe, Manzù makes her rest on a spherical form recalling the globe, with moon scythes crossing the massive block (fig. 18). With her right foot, she is crushing the head of the snake, symbol of Evil and Sin. According to traditional iconography, Mary is represented wearing a veil, or if she is not, with her hair loose and falling on her shoulders.

In any case, she wears overlapping dresses. Manzù’s statue is essential even in the Virgin’s clothing and has a halo with stars around it. The child is bigger in comparison to Marian images from the previous tradition. He wears a tunic, a cloak and a crown with the Cross. He holds a cross in his hands and he hits the snake with it.

Observing this sculpture, we notice the tenderness of the mother-child bond, portrayed through quietness and simplicity, despite the fact these are two divine figures (fig.19).

The debate on sacred art was typical of the Italian cultural scene in the 1930s and went back even to the 1920s. It all began with the Lateran Treaty ratified on 11th February 1929 between Italy and the Vatican, which contributed to relaunch the concept of religious commissions and the contacts between religious and secular worlds. Particularly relevant was the voice of Edorado Persico, an art critic who became Director of the Galleria Il Milione and tried to relaunch a Christian art.

An anecdote, related by Manzù himself, attracts attention to this statue: “Father Gemelli saw my Virgin, but he said he could not put her on the altar, because women complained. It was obvious that she was the girl of the nearby café who served me the coffee every morning”. (F. Minervino, Gli anni della formazione e l’avventura della ricerca: da Bergamo alla Milano 1940).

The outdoor positioning of the statue, in polychrome concrete, caused some serious deterioration because of the absence of protection of any kind. It lost its coloured varnish, whose evidence came out during restoration, and it also lost its halo. The half scythe of the basement and some other parts were also damaged. The halos, the Cross and the half scythe are made of copper and, when it was in the Negri da Oleggio Room, the sculpture used to stand on a wooden base.

Looking at images referring to the iconography of Mary Immaculate, some elements respect the tradition: the moon under Mary’s feet, the stars of the halo and the Snake/Dragon crushed by the Holy Virgin.

These are clear references to the Apocalypse: “A great sign appeared in Heaven: a woman clothed with the sun and the moon under her feet and a crown of twelve stars on her head”. (Apocalypse, 12, 1). Differing from traditional iconography is her expressiveness and her gestures: Mary Immaculate’s hands are generally clasped in prayer, crossed on her breasts or wide open towards God, showing the acceptance of Mary’s vocation to become the Mother of Christ.