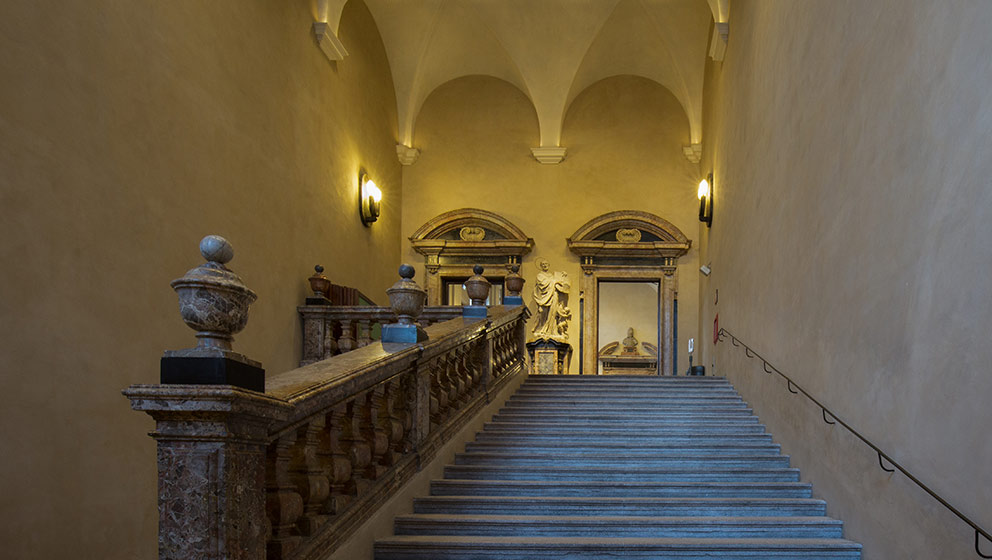 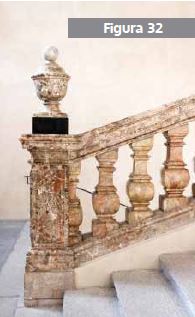 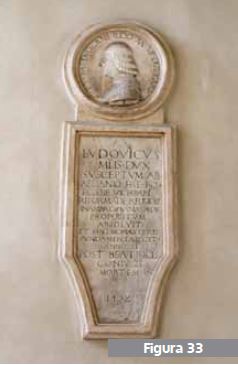 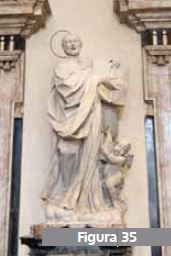 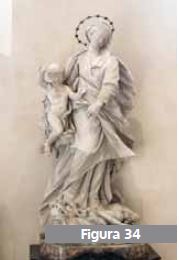 Viam sapientiae monstrabo tibi / ducam te per semitas aequitatis.
I have taught you the way of wisdom; i have led you in the paths of uprightness.
Proverbs 4,11

These three rooms are arranged in a sequence inside the building opening onto the Cour d’honneur. Built between 1624 and 1685, they are the product of a monumental renovation of the main entrance to the Monastery.

They were also a link between monastic and public fruition, represented by the Library, which was situated in the today’s Pious XI Hall and opened to the public in 1783.

Despite the damage suffered in the aerial bombardment in 1943, the complex composed of staircase and entrance hall is still clearly visible on the first floor.

Through historical photographs preceding and following the bombing, it is possible to identify the areas rebuilt after their collapse: the Staircase vault, once frescoed with St. Ambrogio’s Stories, the upper walls of both staircase and entrance Hall, as well as the entrance Hall attic with its underlying vaults.

The Staircase, connecting the Cour d’honneur to the first floor, takes into the Zodiac Hall. Going up the stairs, there is a plaque with the effigy of Ludovico Il Moro, commemorating the foundation of the Monastery, the statue of Mary Immaculate, the statue of St. Bernard and two 1683 portals. The present sculptural elements look subordinated to the architectonical structure.

At the beginning of the two main flights, there is the commemorative stone, dated 1498, celebrating the foundation of the new Cistercian monastery. The stone, with the image of Ludovico Il Moro, was originally located “at the head of the Refectory”, hence near the present entrance to the Aula Magna (fig 33). The change of position of the Sforza stone is particularly relevant: it was a way to historicize and legitimate the presence of the monks inside the monastery, and therefore to acknowledge their historical roots.

Two stucco statues have been placed on large marble polychrome pedestals on the landing between the two main flights and on the last landing. The first statue is an 18th century Mary Immaculate (fig. 34), representing a theological stance. The second one, of St. Bernard, is ascribed to Giuseppe Rusnati and dates back to the end of the 17th century. At St. Bernard’s feet there is an Angel with an episcopal mitre in his hand, referring to the Saint’s refusal to become a Bishop and also alluding to the disputed right of the Saint Ambrosian Abbot to wear episcopal vestments in the Basilica. The Saint holds a book with an inscription on it whose meaning, in line with that of the inscriptions on the portal tablets, proves the authenticity of the current positioning of the statue. (fig. 35). At the end of the staircase two big marble portals, dating 1983, take into the Zodiac Hall.

The room is located on the first floor and is like some sort of monumental passageway, an entrance hall, between Pious XI Hall and the corridors of the old monastery cells, today Cardinal Ferrari and Leo XIII rooms.

Its name comes from the fact that it was crossed diagonally by the Zodiac, a meridian solar line on the floor. Today, to witness its existence, there is only a Candoglia marble commemorative stone with the image of a Capricorn and the date 1756. On one side, a large Palladian window overlooks the Basilica of St. Ambrogio and the present Garibaldi Police Station, built where there used to be the 14th century Church of St. Francesco Grande. At the two ends of the room, there are two pairs of portals: the first one is on the side of the Grand Staircase, the second one leads into St. Pious XI Room (fig. 36).

On the first pair of portals, fitting into broken pediments, there are the busts of two well-known Cistercian monks, St. Robert of Molesme and St. Stephen Harding.

On the opposite side, on the portals at the entrance of Pious XI Room, there are the busts of St. Bernard and St. Ambrogio. The inscriptions on the portals, alluding to a path of knowledge and peace, aim to convey the idea that the Library is where Knowledge transcends its intellectual dimension to become the Science of God. This was not a place intended only for the monks, but for the whole city, as demonstrated by the arrangement of the rooms with access for the monks, whose cells were on the first floor, but also for the external world, thanks to the staircase connecting the Library to the Zodiac Hall. Two modern artworks complete the structure and the 16-17th centuries sculptural decorations: a sculpture of Pious XI by Giannino Castiglioni (1939) and the bust of Cardinal Ildefonso Schuster by Francesco Messina (1941-42). Pious XI’s statue was sculptured a few months after the Pope’s death and portrays him as a teacher sitting at his desk. It is a monument presenting everyday life, well fitting into this space, and it is especially relevant also for its unusual materials, black marble and Zantal alloy. Schuster’s bust by Messina is quite different. It is made of white marble; the Archbishop’s figure is slender and somehow stretched by his vestments, showing a verticality which underlines his spiritual vocation.

The access to this room is through the Zodiac Hall. Today this space is one of the most important boardrooms of the University, (fig. 37) where graduation ceremonies took place. At the end of the 17th century, however, it was the site of the monastery library which, as mentioned already, was also open to the citizens. The original decorative structure and furniture of this room has disappeared. There is only some 20th century photographic evidence of how the vault had originally been frescoed. Today, the room is decorated by two works which really differ from one another.

A huge early 20th century Crucifix, which has been moved here in 1922 from the Aula Magna of the old University campus in Via Sant’Agnese. It was supposed to be part of the liturgical furniture of the Chapel. A monumental portrait of Pious XI, painted by Carlo Prada in 1922, in which the Pope is portrayed in the gardens of the Vatican Palaces. The link between the University and the Church, and the close relationships between Father Gemelli and Pious XI when he was simply known as Achille Ratti, Archbishop of Milan, account for the presence of the portrait and of the sculpture decorating the Zodiac Hall.

The inscriptions on the portals:

Among the subjects sculptures on the portal, there are some Cistercian fathers to remind that this place, before becoming a University, had been since 1487 a Cistercian monastery. The Cistercian order originated around the end of the 11th century, from the separation of a rigorist trend from the Cluniac Order. The founder was Robert of Molesme (1024 ca.-1111), who founded a new monastery in Citeaux (Cistercium) where all the old precepts were restored. But the diffusion of the order in Europe began with Bernard of Clairvaux (1090-1153), who joined the order in 1112. Bernard entered Citeaux Monastery itself and, in 1115, was also founder of the famous Abbey of Clairvaux. Stephen Harding (1059-1134) was an English monk, cofounder of the Cistercian order.

In the Zodiac Hall there is a XVII century marble washstand. This element can be explained not only by a physical need, but also by a symbolic meaning, representing the moment of purification necessary to be deserving of the knowledge represented by the Library (today’s Pious XI Hall).