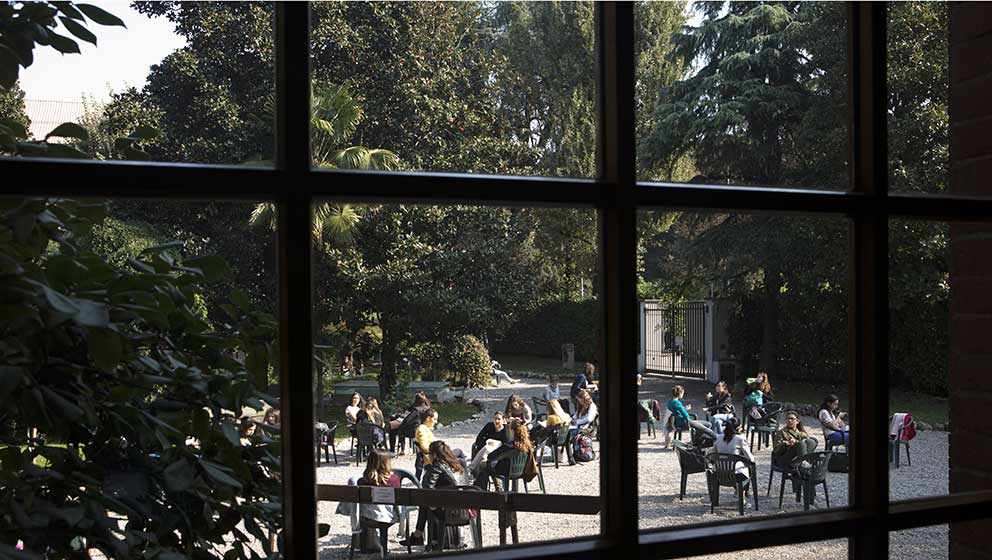 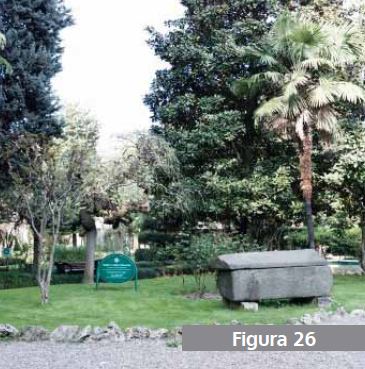 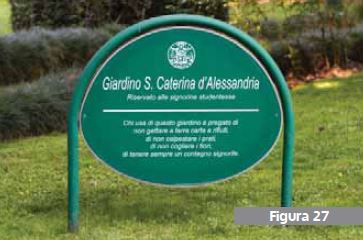 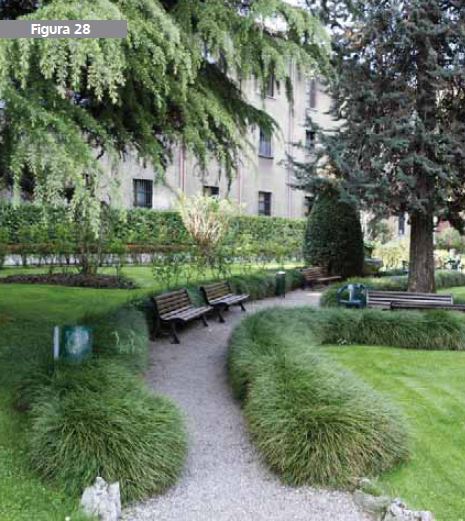 Garden of St. Catherine of Alexandria

The Garden draws prestige from several types of trees and plants well arranged in a well ordered and fenced structure. In the green area, capitals and stone blocks are scattered around.

In its present arrangement, the garden appears to be a fragment of the “Viridario Magno”, a typical late Medieval garden, popular especially in Northern Italy. Its rather simple design was characterized by orthogonal lines, interspersed by changes in surface, banquettes and fences. The paths were made of different materials, such as stone, bricks and polychrome tiles. The garden, on the other hand, was made of clay court, fine gravel and grass patches, where it was possible to pause for rest. In spite of the absence of a geometrical centre, in the green and flowering areas of the “Viridario Magno”, you could breathe an increasingly intimate and exclusive atmosphere.

Its location was likely to be near the place where St. Augustine’s conversion took place and close to St. Augustine’s “Sostra”, the debarkation point by Naviglio, where most marble blocks arrived to be carved for the Dome. The Garden’s Sostra was a big roofed storage for stone manufacturing, a sort of storage area for incoming stone blocks. Therefore, it cannot be ruled out that the location of these blocks in the Garden might correspond to their original site.

In the Garden of St. Catherine of Alexandria, in addition to a marble slab from the Dome, decorated with masks, and two 3rd-4th centuries sarcophagi, we can see several remains dating back to the 15th century, coeval to the building of the University (1497).

Among them, particular attention is to be devoted to three capital columns, which are similar for kind, dimension and material to the columns in the “Monks’ Crypt” below the 16th century Refectory (today’s Aula Magna). Other capital fragments in the Garden are similar to capitals from Lombardy factories, such as those of St. Ambrogio’s Rectory, of S. Maria presso S. Satiro in Milan and of the Dome in Pavia. These fragments are referred to Bramante for the foliage decorative model with Ionic spirals, particularly popular in 1480 Lombard culture. The twenty one stone blocks and two columns are in granite of Montorfano dating back to 16th-17th centuries and are subsequent to the building of the monastery.

Since 1928 the Garden, dedicated to St. Catherine, virgin and martyr, procuress of studies and of some social categories of education, becomes an area specifically enjoyed by young female students and, therefore it is called Garden of the Virgins.

Between 1934 and 1935, Giacomo Manzù makes two bronze tondos for the Chapel of the male (Augustinianum and Ludovicianum Colleges). The works were placed in the balustrade gate separating the chapel Presbyterium from the devotees’ area. In 2005, the Chapel became a reading room and the tondos were moved to the veranda of the Aula Magna. The bas-reliefs portrayed the symbols of the four Evangelists: St. Luke’s Ox, St. John’s Eagle (similar to that of the pulpit in the Basilica of St. Ambrogio), St. Mark’s Lion and St. Matthew’s Angel.