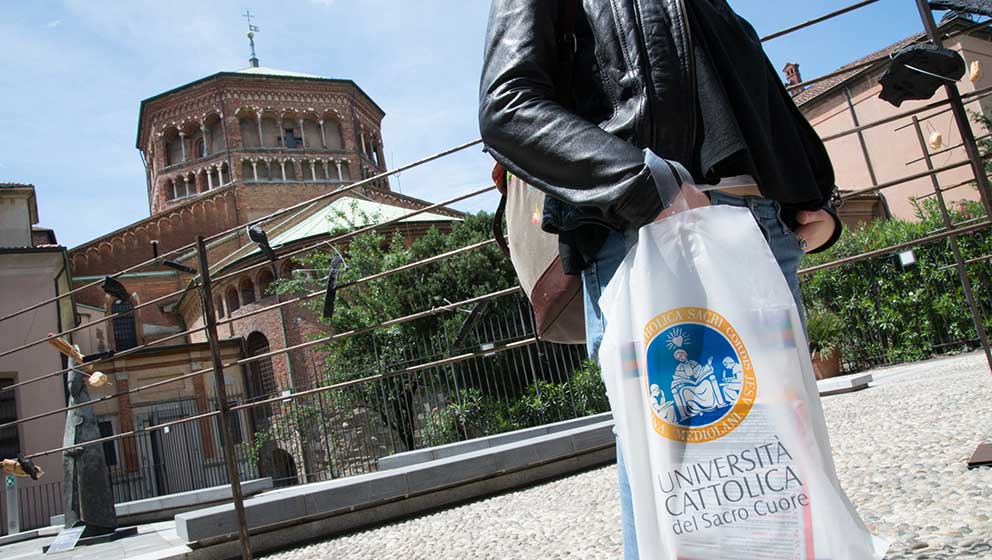 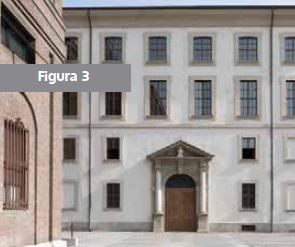 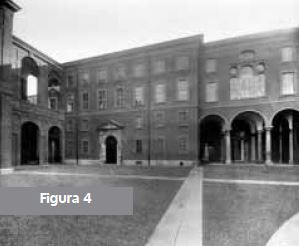 What is time then? If nobody asks me, I know it very well:
but if I were to explain it to someone asking me about it, I do not know.
St. Augustine, Confessions

The Cour d’honneur is dedicated to Pope Leo XIII and takes to the Grand staircase. The longitudinal body of the Chapel of the Sacred Heart flanks the courtyard.

Between 1928 and 1929, the architect Munzio added to the pre-existing two-storey building an upper architectural order to connect it with the arcade going from the main entrance colonnade to the axis of the Doric Cloister.

The windows on the walls facing the courtyard, some of whom are inevitably false, maintain the rhythm typical of the monastic building and were not removed in order to preserve the ancient monument. At its edge, the courtyard is crossed by the apse of the Basilica of St. Ambrogio. To allow this perspective view, Muzio demolished two little houses opening on today’s Largo Gemelli, building the entrance to the new Università Cattolica seven metres backwards. While the entry archway to the monastery became the entrance to the Chapel of the Sacred Heart, an iron gate was placed as the entrance to the Courtyard. There is also another pre-existing part of the monastic structure, the “Piano Nobile”, an area that in the Middle Age was assigned to academic acts. Proceeding this way, you reach the entrance hall where the Grand staircase is located. The choice to cover the concrete surface with red bricks shows Muzio’s intention to return to a recurring element of Lombard Romanesque art. It celebrated the link between past and present and the possibility of their cohesion in a harmonic combination.

In the courtyard a 1952 bronze statue by Giacomo Manzù peeks out. The artwork portrays a standing Cardinal, using an essential iconography, typical of the works of the artist from Bergamo. The statue was placed in the courtyard at the beginning of 2000.