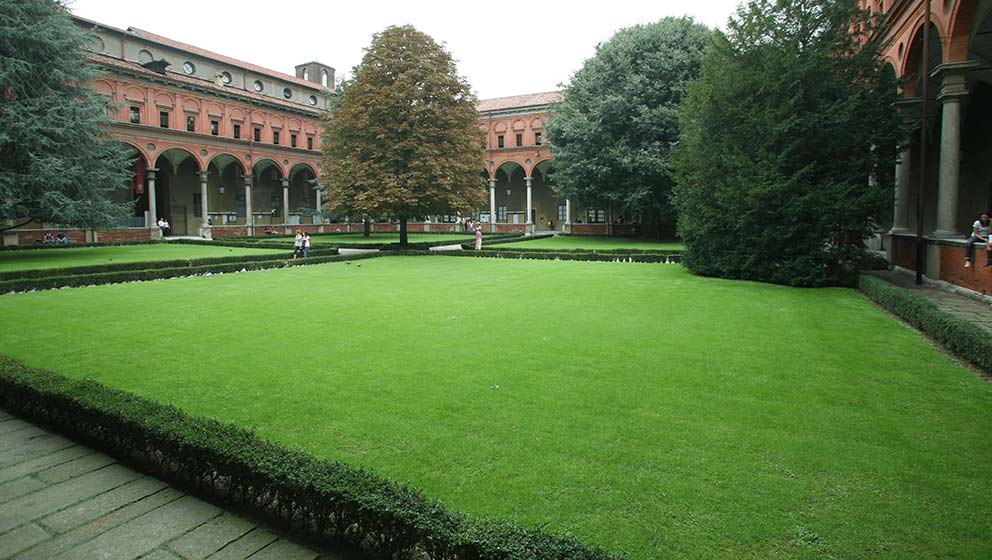 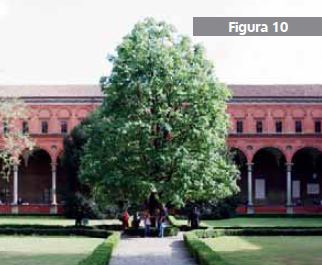 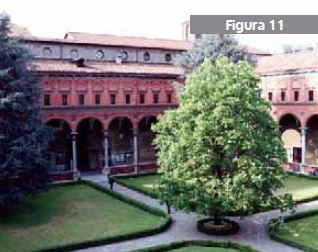 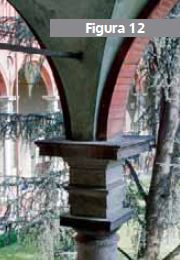 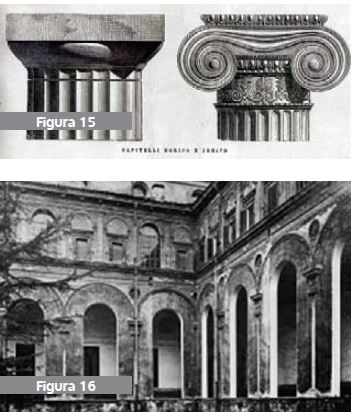 Two square identical cloisters, each side measuring sixty meters, one Doric and the other Ionic. The whole building with its colonnades, its corridors, its rooms is symmetric, perfect and extremely grand; it kept being improved up to the 18th century, but its planning and layout were so perfect and well devised that everyone who worked on it had to strictly follow such directives.

Speech by Giovanni Muzio at the conference “Architects and Architecture in Lombardy”, Venice 1932. This speech was to be included in the Venice Biennale of the same year, in regards to the project of Bramante’s Cloisters in the ancient Cistercian convent.

The Cloister Project (fig. 10) has been part of a unitary thought from the very beginning. The idea of creating this monumental body was the product of the ambition of two historical figures extremely relevant for the City of Milan: Cardinal Ascanius Sforza and Duke Ludovico Il Moro. They chose the architect Donato Bramante.

In his initial project, Bramante designed four cloisters and, between 1497 and 1498, he also made a wooden model of them. The current structure refers to Bramante’s project, but it is also the product of 15th and 16th centuries interventions.

The slowing down of the works on the monumental complex begun by Bramante might have been caused by Ludovico Il Moro’s fall first (1499) and by Ascanius Sforza’s death later (1505). The works for the refurbishment of the Doric Cloister began in 1562, with the addition of 11 columns on the side of the big garden. Characteristic of the 17th century, on the other hand, was the heated debate about the completion of the Western wing of the Doric Cloister (fig. 13-14), to which took part also Carlo Maderno, the architect who built the façade of St. Peter’s Basilica. At the end of the 18th century, Napoleon’s officials dismantled the convent complex to leave space for the building of a military hospital.

When Giovanni Muzio began the renovation of the cloisters, between 1931 and 1932, they were in dreadful conditions because of the cross-contaminations accumulated over the centuries (fig. 16). Shutters and arched partitions had been added to the first order, while in the second order several windows had been shut and some others had been altered to satisfy the need to subdivide the space of the hospital. The architect eliminated superstructures, ceilings and partition walls. Then, he consolidated the walls and the upper arches, substituting, because of load issues, the corbels above the columns with granite covered with brickwork and opening, in the second order, rectangular niches within the arch order.

When the convent was completed, three arches in the Doric Cloister had already been refurbished. Therefore, Muzio worked on the most delicate part of the monument. His main aim was to start from Bramante’s model, so that the existing monument dictated the rules for the following intervention.

The main difference between the two cloisters in terms of composition and definition is the capital of the columns. The Doric order is the first of the three classical orders and the most simple in its architectural form. The name “Doric” comes from the population of Dorians, from whom it supposedly inherited its serious and monumental character. The Doric capital is simple and essential: it is made of a simple shelf on which stands a trabeation block, characterized by the inclined strips of the architrave, which are two in this architectural order. Other elements are a rather protruding frame dripstone and the overlying cubic element.

The Ionic capital, on the other hand, has two volutes at its top, two spiral forms resembling two curls. The design of this capital is very precise and refined and its elegance reminds of the female figure, more slender and refined than the more masculine massive block of the Doric order (fig. 15).

The façades of the Cloister are organized on two levels. A pointed arch begins from the capital and leans on the column, placed on a pedestal. The rhythm of these architectural elements enables to describe a space made up of spans with cross vaults. The vaults, 7.5 meters high, were specifically devised by Bramante to house big rooms, refectories, libraries and monk cells. In the triangular spaces between one vault and the other (pendentives) are placed some tondos called oculi, typical of Lombard Renaissance.

In the upper order, on the other hand, there is a window, according to the commissioner’s request. This architecture recalls the Spedale degli Innocenzi, built by Brunelleschi in Florence between 1419 and 1455.

Ascanio Maria Sforza: one of the commissioners of Bramante’s cloisters; he was a Cardinal, son of Francesco Sforza, Duke of Milan, and brother of Ludovico Il Moro. He excelled for his diplomatic abilities, but, in spite of the fact that the College of Cardinals refused the Pope’s investiture, in 1479, he became Bishop of Pavia.

Ludovico Maria Sforza: known as Il Moro, was Duke of Bari and of Milan from 1480 to 1499. Under his reign, Milan lived a time of great prosperity especially from a cultural point of view, thanks to the presence at court of Leonardo and Bramante.

Donato Bramante: born in Fermignano, in the State of Urbino, in 1444, he was directed towards painting by his father, but, according to Vasari, he also enjoyed architecture and perspective. He came to Milan in 1488 and stayed there until Ludovico Il Moro’s fall in 1499. These are flourishing years for his work, thanks to Leonardo da Vinci with whom he established a friendship at Milan’s court. Bramante’s interest in perspective can be seen in Milan’s Church of S. Maria presso S. Satiro. At the beginning of the 16th century, he moved to Rome, summoned by Pope Julius II for new projects in the Vatican. He died in Rome in 1514.