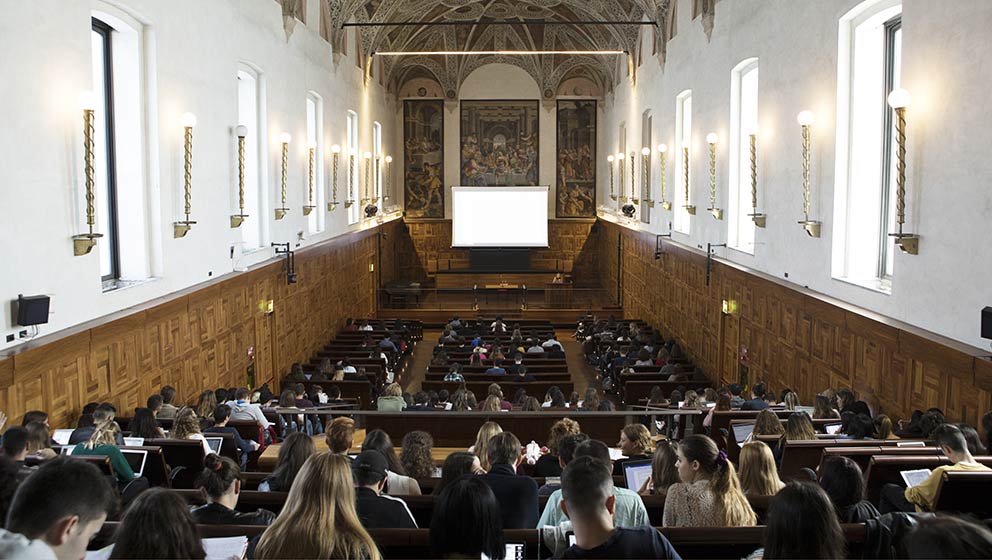 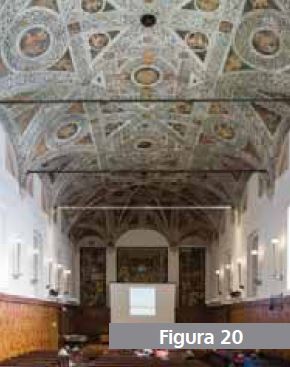 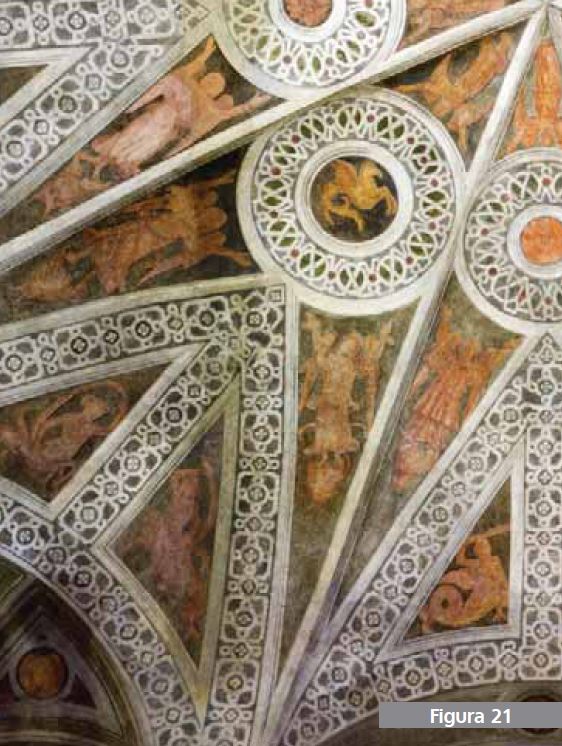 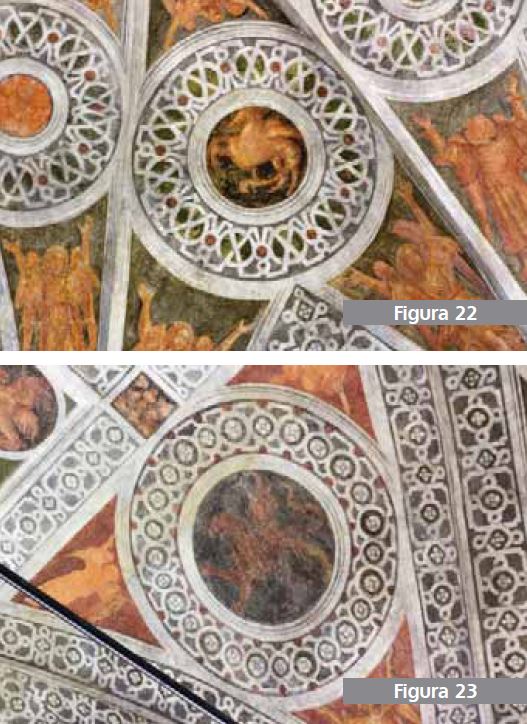 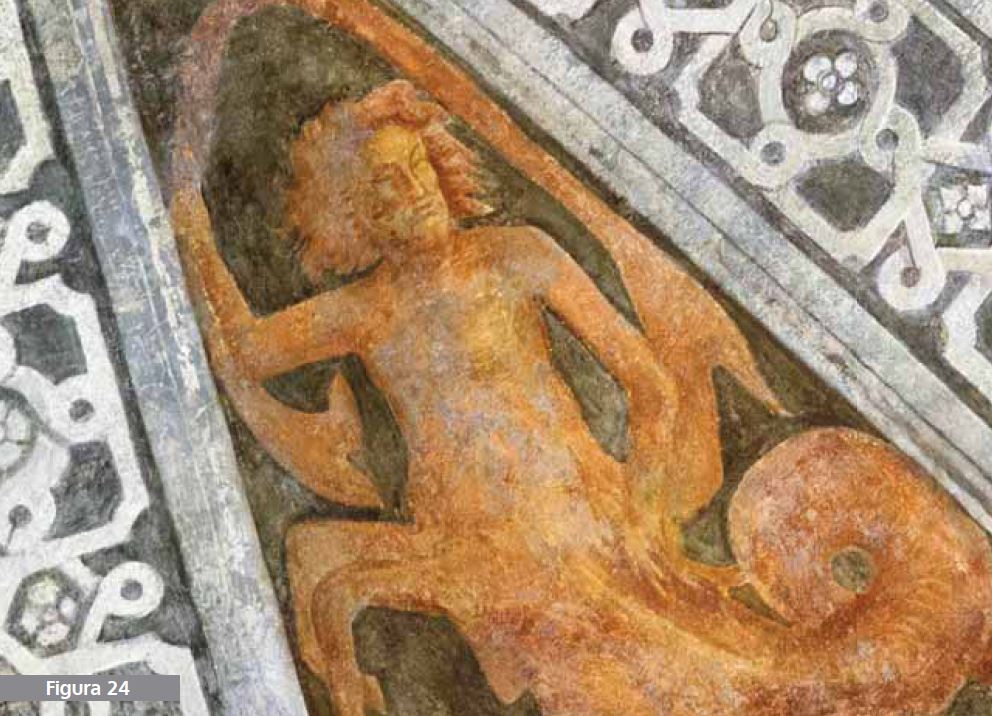 This room is situated between two coeval cloisters by Bramante, creating a natural extension of their common side. According to Bramante’s project, the monks’ Refectory was situated here. The lunule-shaped arched vault and the Renaissance decorations (fig. 20), that we can still admire today on the back wall and on the vault, date back to the period of this first function, both convivial and representative, of one of the most important monastic institutions in Milan. In comparison with today’s appearance, the Benedictine Refectory was marked in its length by Doric pilaster strips, while the vault decoration included the lunettes with illustrated tondos. Above the fresco representing “The Wedding Feast at Cana2, there was “David playing the harp next to two Seraphs”, and, along the walls, there were busts of the Apostles.

Architect Giovanni Muzio was the one who, in his broader plans of the recovery of the ancient monastery, restored the original importance of the ancient monks’ Refectory. In the Napoleonic era, as during World War I, the whole monastery had been used as military hospital and the Refectory had been divided into four floors to provide rooms for the recovery of the patients. Muzio’s intervention (1927-34), taking inspirations from some 1834 engravings by Cassina, brought this space back to its initial unity. Long gone the perimetral lunettes with the Apostles and the ribbed Doric pilaster strips, the architect inserted in their place some corbels as a foothold between the vault and the stonework.

Above them, he inserted metal tie-rods to secure the room’s stability. Keeping the same rhythm, he put some wider and lower windows in the lunette intervals on the longitudinal walls. In correspondence with the corbels, Muzio designed and produced a series of golden torch lamps, wrapped in a band.

In 1933, the architect put the “Wedding Feast at Cana” by Calisto Piazza back on the front wall of the room. In 1845, this work had been moved when the monastery had become a military hospital and it was now brought back from Palazzo di Brera where it had been recovered. The opposite wall is the entrance wall where Muzio decides to open three arcades resting on two columns and two pilaster strips, leading to an outdoor balcony. To grant better acoustics, he puts a high panelled wainscot running around the room acting also as a string course. Muzio’s intervention also included a gallery reserved for the authorities, which was then destroyed with the 1990s renovation, dividing the space into a parterre and terraces.

The stairs leading to the terraces were made of wood and led from the ground floor to the first floor, following the evolution of the vault. They were then modified in the 1960s, when they were replaced by a single staircase directly connected to the entrance. Between the parterre and the gallery, as a passageway, Muzio built a window-panelled corridor connecting the Aula Magna to the Garden of St. Catherine.

The most recent renovations by Luciano Formica allowed for a better appreciation of the whole original decorative complex unveiled by Muzio, recovering some Seraphs’ faces sited in the lunettes from which the Apostles had been removed.

The decorative scheme is set by a geometric order made of horizontal bands, triangular spaces and medallions (fi. 21-22). The medallions, smaller in the central area of the vault, become larger in the pendentives and are supported by bronze monochrome angels. Both the clypei and the triangles, into which the barrel vault with lunettes is divided, contain effigies of mythological animals with dual nature, such as bronze Tritons and Centaur-Dragons, learned reference to symbolic Christological meanings.

The inspiration behind such scheme was likely Pacifico Bizzozero, one of the erudite Abbots of the monastery and Prior for seven times in the first half of the 16th century. From a stylistic point of view, the decoration of the vault (fig. 23-24) dates back to 1520s or 1530s and follows the trend of grotesque decorations very popular after the rediscovery of the Domus Aurea in Rome.

On the front wall there is the masterpiece by Calisto Piazza, mentioned above. The wall fresco, made in 1545 by the painter from Lodi, depicts the “Wedding Feast at Cana”. In the fresco, the painter, assisted by the workshop, produced a work of vast figurative scope; he renovated many iconographic aspects of the scene and gave it theatrical seriousness through rigorous perspective and the depiction of “moti” (meaning both “movement” and “emotions”). The biggest innovation in Calisto’s composition is his attempt to create a “universal” language, which can be as communicative as possible. His work is part of the fresh wind typical of Spanish Milan, looking at the work of painters such as Titian, Paris Bordon, Moretto da Brescia and Gaudenzio Ferrari, and it took place at the same time as his decorations in the Southern Chapels in the Basilica of St. Ambrogio.

In the 16th century, the theme of the “Wedding Feast at Cana” was very popular in the monasteries in Veneto. This subject was influenced by St. Bernard’s thought. The banquet at Cana mirrors the heavenly banquet to which we have all been invited. Mary’s intercession is crucial to show Christ man’s needs, but it must be followed by man’s personal deeds, whose symbol is the filling of the six jars with water.

Calisto Piazza (Lodi, 1500-1561) was the leading figure of the Piazza 16th century dynasty of painters. Since 1523, he worked in Brescia with artists, such as Ugoni, Merici, Romanino and Moretto. His first works imply the knowledge of Ferrara’s art of the time. After 1538, he moved to Milan where he frescoed one room of the Castello Sforzesco; then, he worked in Novara and in the Abbey of Chiaravalle.